We have certainly not started this half particularly well

Since weâve scored, felt weâve controlled the match, in general, but its only a 1-0 lead and still 3 minutes plus to go

Re: Match Thread: Burnley FC vs Wolves
Posted by: Ivybridge Wolf (IP Logged)
Date: 15 July, 2020 19:52
Right on cue, Woods misses an open goal with Patricio all at sea out of position

Debate on the penalty decision as Doc was trying to defend himself from an overhead kick from Burnley.

Re: Match Thread: Burnley FC vs Wolves
Posted by: an angry wolf (IP Logged)
Date: 15 July, 2020 19:59
Not a bad performance but a disappointing result bearing in mind we dominated the game. We had enough control of the match to score at least one goal and lack of attacking prowess cost us today, but as usual VAR ruined the game with the ridiculous handball rules we have in football today.

We don't have enough upfront to be in the champions league unfortunately.
Re: Match Thread: Burnley FC vs Wolves
Posted by: Ivybridge Wolf (IP Logged)
Date: 15 July, 2020 20:14
Frankly, that was an incredibly harsh penalty decision. Iâm still trying to understand what is going on with handball these days and in no way did Doc in anyway go in to deliberate touch the ball with his arm, nor was it an unnatural placement of the arm. To be honest, were you Doc, youâd be hard pressed not to expect a full face of boot if Doc did not do what he did to potentially defend himself from the overhead kick, so he canât be blamed. Additionally if Dean hadnât have given it, Iâm not certain VAR would have overruled him in that situation ...... or would it?? Who ffing knows these days.

So frustrated, I believe we did enough to win ..... a single goal is never enough though.

Re: Match Thread: Burnley FC vs Wolves
Posted by: an angry wolf (IP Logged)
Date: 15 July, 2020 20:22
It's easy to criticise the officials but they only interpret the laws handed down from powers above and enforce them. Even leaving aside this game, I've been fiercely opposed to penalties handed out for innocuous incidents and a player putting his arm up to protect himself against what amounts to dangerous play should not be a game defining moment. Common sense should be utilised and the question asked " Does a player trying to protect himself warrant a 90% chance of a team conceding a goal from a penalty depriving a football club of two points".

The penalty rules should not be as they currently stand where any foul even if a goal doesn't look likely is a spot kick as it's disproportionate to the offence. I would propose a free kick maybe in the area from where the offence took place similar to a keeper back pass scenario if he picks it up. It would still punish the person committing the foul but not give away a penalty which is a complete game changer/ruiner depending what team it is given to. A player instinctively putting his arm up should not be used to define a result in a 90 minute football game
Re: Match Thread: Burnley FC vs Wolves
Posted by: Andy Fincher (IP Logged)
Date: 15 July, 2020 20:32
It was dangerous play. Should have been a free-kick to Wolves or, as nothing came of it, play on.
Ridiculous decision.
Re: Match Thread: Burnley FC vs Wolves
Posted by: an angry wolf (IP Logged)
Date: 15 July, 2020 20:46 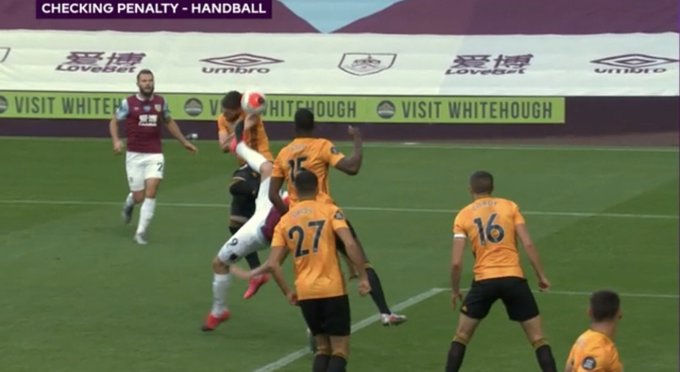 Clearly dangerous play but the laws are so weighted in favour of giving penalties it was never going to be overturned. I've seen players with their arms by their side and had balls blasted like rockets from 6 yards out get pens given against them
Re: Match Thread: Burnley FC vs Wolves
Posted by: Andy Fincher (IP Logged)
Date: 15 July, 2020 20:51
Whether we qualify for Champions League via the Europa League or no, I have no idea, but it won't happen this season by means of the Premier League.
Rather than looking at teams above I think we should be looking at what's going on below as the chasers are closing. We've had a great season so far and I would hate to end with no European qualification at all.
Re: Match Thread: Burnley FC vs Wolves
Posted by: an angry wolf (IP Logged)
Date: 15 July, 2020 20:53
Thinking about it , I dont think it is "dangerous play" as a striker is entitled to go for a bicycle kick late in the game- if it was a wolves striker we would all be saying he was entitled to go for it. The problem is in the rules- a penalty should not be given for any old foul/handball but clear goal scoring opportunities denied to the attacking team by a foul. The laws of a foul inside the pen area should be different as a penalty is such a serious punishment for any team and common sense of a player protecting himself is not " denying a team a clear goal scoring opportunity".

Most of the pens are given by handballs that are contentious rather than other fouls and it's the handball rule that needs to change asap
Current Page: 2 of 3
Goto: Forum List•Message List•Search•
Sorry, only registered users may post in this forum.
We record all IP addresses on the Sportnetwork message boards which may be required by the authorities in case of defamatory or abusive comment. We seek to monitor the Message Boards at regular intervals. We do not associate Sportnetwork with any of the comments and do not take responsibility for any statements or opinions expressed on the Message Boards. If you have any cause for concern over any material posted here please let us know as soon as possible by e-mailing abuse@sportnetwork.net