Wolves undoubtedly face their most challenging weekend of football for a long time starting today when they host current Premier League Champions Manchester City at Molineux, before travelling to Anfield on Sunday to face current Champion favourites Liverpool.

In his press conference Head Coach Nuno Espirito Santo has described the decision to make Wolves play two such difficult games within 48 hours as 'absurd'. However this is the challenge facing Wolves during their festive competition. I was outside a pub last night and heard a chap talking on his phone about the Liverpool vs Leicester result, and he said "Well it's on Wolves now - let's hope they can put a few past City". So Wolves will not only be hoping to please their own fans by completing a double over City this season, but will also have the Leicester fans hoping for a good result at Molineux.

Wolves have reported no new injuries or suspensions so it's likely that an unchanged team will take the field this evening, and fans will be hoping for a very much better start than against Norwich.

Tonight's game can be watched on Amazon Prime only. It's difficult to know whether streaming of the game will be possible. This board will carry a commentary and board members will be encouraged to post their observations for the benefit of those unable to follow the game.

pqs: qs:
Match Thread: Wolves vs Manchester City
Posted by: Wolves (IP Logged)
Date: 27/12/2019 11:32
What do you think? You can have your say by posting below.
If you do not already have an account Click here to Register. 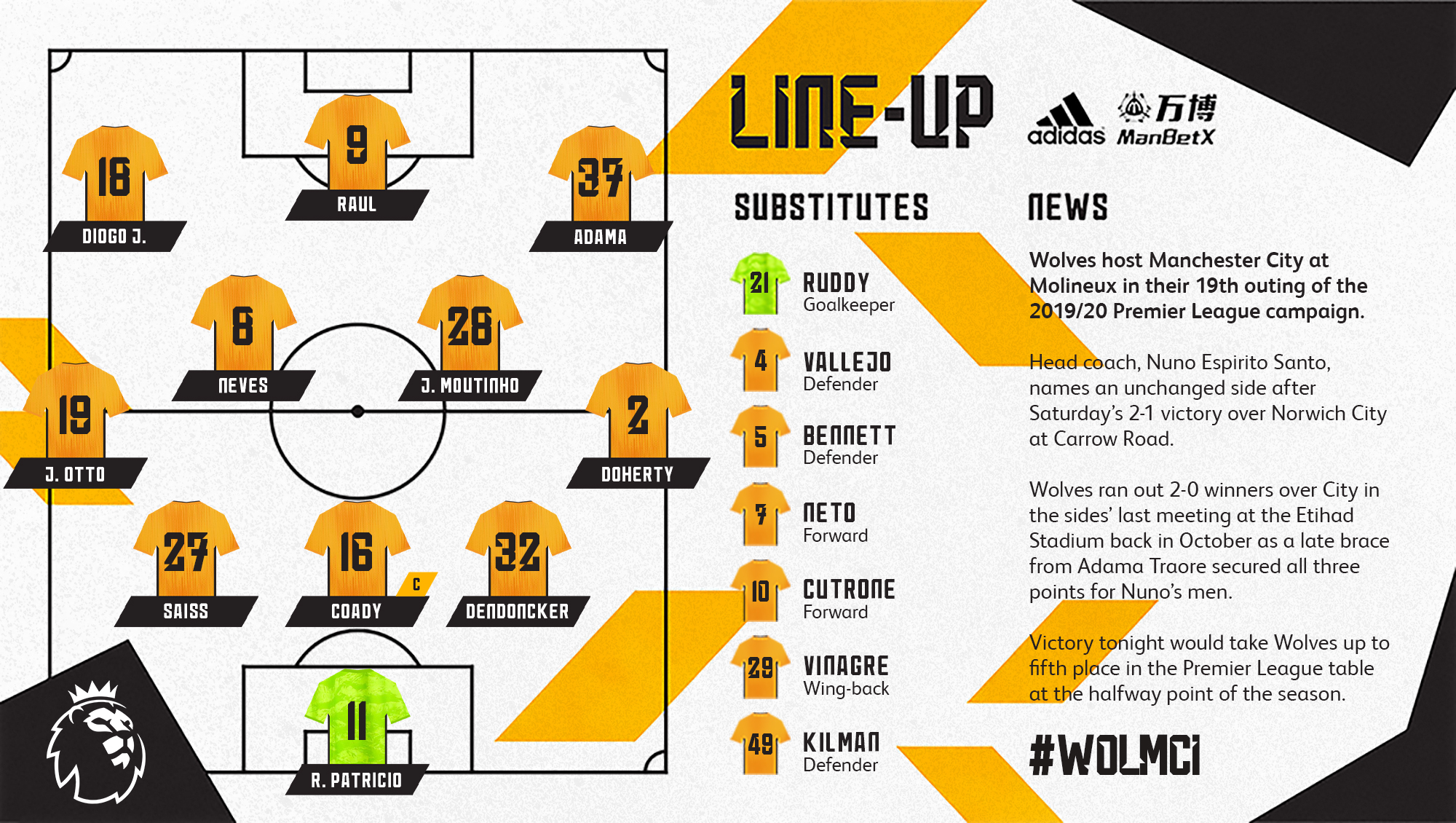 What a comeback, some, Iâm sure, will point out we played against 10 for 80 minutes, nevertheless it was against top quality opposition as well as the hideous nature of VAR.

The red was right but my exasperation with the penalty decision was just like 90% of the ground and all of us watching. How on earth can VAR overturn the refs decision for a goal kick, and the time taken to arrive at the decision was obscene. âClear and obviousâ was the terminology used to tell us at the start of the season when VAR would be used to overturn an on field decision. What was clear and obvious was this came nowhere near this ridiculous definition. I felt cheated, furious, resigned and much much more. Something has to be done, VAR is descending football in chaos.

As for the decision to retake the penalty , i was apoplectic with rage! Okay encroachment by Coady did happen but one of the City players was in front of him when the penalty was taken. How unlucky was Patricio? Twice

As for the second half, the Sterling second was very well taken, aided by Donk failing to set the offside trap and Patricio going down too early.

Then we were just terrific! Traore, again, was magnificent however the whole team kept on pushing for the opening, I credit them all. Our first goal ... what cracker! The second, Brilliant hassling and play from Adama with a cute Raul finish and a superb 1-2 between Jimenez and the Doc for our third ...... cue âscenesâ! From despondency to exhilaration in 45 minutes.

What a team we have, so proud of âum. As fans we can ask for no more .... effort, skill, energy, quality with high, high drama. Not too sure whether my cardiovascular system can put up with it though! In which case, Iâll settle for a no fuss, no nonsense, boring 2-0 Wolves win at Anfield on Sunday....... !!

All the very best to our team, UTW

Re: Match Thread: Wolves vs Manchester City
Posted by: Cheshire wolf (IP Logged)
Date: 29/12/2019 11:19
Regarding the VAR issue:
I fail to understand the ongoing discussions about the referee going to the sidelines and reviewing the play for himself on the screen which is in-situ. Surely the VAR ref should be able to recommend this to him so he can review it and make a decision for himself rather than being overruled.

I was more infuriated by the 'encroachment' issue. I have seen games where - I think it was Leicester - the penalty was saved then another player converted, but VAR showed he had encroached before the kick was taken. I fully understand this being ruled out. However Coady stood well back from the line and was only reaching the line when the ball was struck, before going into the area and clearing the rebound from Rui. Saiss and Jonny were encroaching but had no involvement at all, and as Ivybridge has said, Bernardo Silva was ahead of all our players, so I do not understand why it should have been retaken, and just seems to be bureaucracy at its worst.
Re: Match Thread: Wolves vs Manchester City
Posted by: Andy Fincher (IP Logged)
Date: 29/12/2019 15:54
I agree hat Bernardo Silva was ahead of our players and I must admit that I don't know what the ruling is on that. Unfortunately though, Coady had encroached into the "D" which he shouldn't have.
The only clear and obvious thing about VAR is that it should be dumped.
Goto: Forum List•Message List•Search•
Sorry, only registered users may post in this forum.
We record all IP addresses on the Sportnetwork message boards which may be required by the authorities in case of defamatory or abusive comment. We seek to monitor the Message Boards at regular intervals. We do not associate Sportnetwork with any of the comments and do not take responsibility for any statements or opinions expressed on the Message Boards. If you have any cause for concern over any material posted here please let us know as soon as possible by e-mailing abuse@sportnetwork.net